At its core, React is just JavaScript. It doesn't need a build system or fancy syntax. And with just two functions, it lets you create something amazing...

James is the editor of React Armory, and has been creating things with JavaScript for over 15 years.

So you’ve heard all the fuss about React – apparently it’s the best thing since Visual Basic. But you’ve spent a couple hours investigating, only to find so many buzzwords that it just feels overwhelming. NPM and Redux and Babel and react-router and Webpack and all I want is somebody to just tell me how to use React already!

Luckily for you, that’s exactly what this guide will do! Don’t believe me? That’s OK – you will after you’ve built your first React app in only 2 minutes. Without downloading or installing anything. Just by following this exercise…

Are you familiar with HTML, CSS and a little JavaScript? Great, that means you can write a React app!

In this exercise, you’ll use React to add some content to a blank page. But instead of starting by creating a HTML file somewhere, let’s have a little fun.

See the code below? This isn’t just any old code block – it is an editor that gives you instant feedback as you type.

Try it out by changing the blue number 0.01 (next to sprout) to something else like 0.15. You can also click “Start animation” in the Preview pane to animate the tree; try starting the animation after setting new values for sprout and sway.

The tree is based on @swizec’s fractal tree. Thanks!

By the end of this guide you’ll be able to create this tree all by yourself! But let’s not get ahead of ourselves, you still need to complete the first exercise. So without further ado, your task is to remove the <PythagorasTree ... /> tag in the above editor, and replace it by typing out the following:

Why type it out instead of copy and paste? Well, typing forces you to process each of the individual commands. It drills them into your head in the process. Copying and pasting just gives you a short feeling of cleverness and a little dopamine. And if you just want dopamine, quit reading and play flappy bird.

Did you try the first exercise? Then Congratulations! You’ve made a React app that renders a comic inside a HTML page (you can see the HTML by clicking on the “HTML” tab). It should look something like this:

document.getElementById('app') returns an object called a DOM Node that lets us interact with the HTML element with the id app.

But this exercise was pretty simple. All you did was render an image to the screen. The interesting part is in how you did that. In particular, how do the tags work? They don’t look like JavaScript?

Actually, the tags aren’t JavaScript. Instead, they’re converted to JavaScript by a tool called JSX. For example, if you were to convert the above JSX code to JavaScript, you’d get the following:

The thing about JSX is that to use it, you’d need a build process, which would mean (at minimum) understanding and installing NPM. And if you’re just getting started, learning a build process to avoid typing React.createElement() a few times doesn’t make any sense. Luckily, you don’t need JSX!

To see this in action, try copying the above code block into the editor below. And remember – you’ll get more benefit from typing it out than copying and pasting!

Now that you’ve called createElement() a few times, do you think you have an idea what it does? If not, relax – we’ll cover it soon. But putting this aside for a moment, what does that ReactDOM.render() method do?

At it’s simplest, React is a library for creating and updating HTML elements.

ReactDOM.render() is the function that actually does the creating and updating. It takes a React Element object that describes what to render, and uses this to update the DOM node that’s passed in as the second argument.

But wait a moment, isn’t React.createElement() creating elements? It is, but maybe not in the way you’d expect. The “elements” that createElement returns are actually plain old JavaScript objects that describe the element that you’d like ReactDOM.render() to create. It might help to think of React Elements as configuration objects for ReactDOM.render().

The best way to come to grips with React elements is by toying around with them, and that’s what this editor is for. Here are a few thing to try:

React Elements are just JavaScript Objects. Each object contains enough information to describe a single node in the DOM. They also contain some magic smoke that React uses to keep track of the elements, but you’ll never need to touch this unless you want to work on React itself.

There are three properties of a React Element that are worth caring about:

The React.createElement() function requires that you pass a type and props as the first two arguments. Any further arguments are treated as the element’s children.

One thing that can be a little tricky is remembering which properties you can set on the props object. While these are mostly the same as standard HTML attributes, you’ll sometimes find a few differences. For example:

If you know the DOM, then this probably feels familiar. If not, remembering the differences directly can be a bit of a pain. But there’s a trick – take the name of the HTML or CSS attribute that you want, and camelCase it.

Of course, no mnemonic is perfect. So to make life easier, you can print out the hi-res prop-naming cheatsheet that you’ll get when you register for free as a React Armory member – but I digress! Now that we know what elements are, let’s practice using them.

Since React.createElement() is just JavaScript, you can use it amongst loops, if statements, and anything else JavaScript allows.

Here are a few examples:

Now that you’re familiar with React Elements, let’s use them to play React Spiral FizzBuzz!

If you aren’t yet familiar with React Spiral FizzBuzz, the rules are as follows:

Some examples import helper files with the ES6 import statement. In order to ensure that the import statements work, the <script> tag in your HTML file will need to have the attribute type="module".

While <script type="module"> is a standard, some browsers are still missing support. But that’s ok, because the React Armory editor compiles the import and export statements out before running your code – so it just works.

Figuring out how to position the boxes in a spiral is a bit of a pain, so I’ve supplied a getBoxStyle(n) function that returns a style object for box n.

To start you off I’ve supplied an array with 3 box elements. Now obviously, you could “win” by just repeating the existing createElement() line 15 times and manually setting the content. But instead of doing this, try to use a loop to create your boxes array.

One last thing: make sure you pass a unique key prop to each box, just like the starting code. We’ll discuss why you’d want to do this a little later.

If you’re having any trouble figuring it out, you may press the “Solution” button below the code. But please, don’t push the button unless you’ve given it a bloody good crack.

Got it? In that case, Congratulations! If you can write FizzBuzz in React then you’re well on your way to creating Todo lists or getting a well paid job at a mega corporation!

What’s in a fractal tree?

But back to the problem at hand – we’re building an animated tree. And since we now have a single branch of the tree, it looks like we’re a good part of the way there! There’s just one problem… 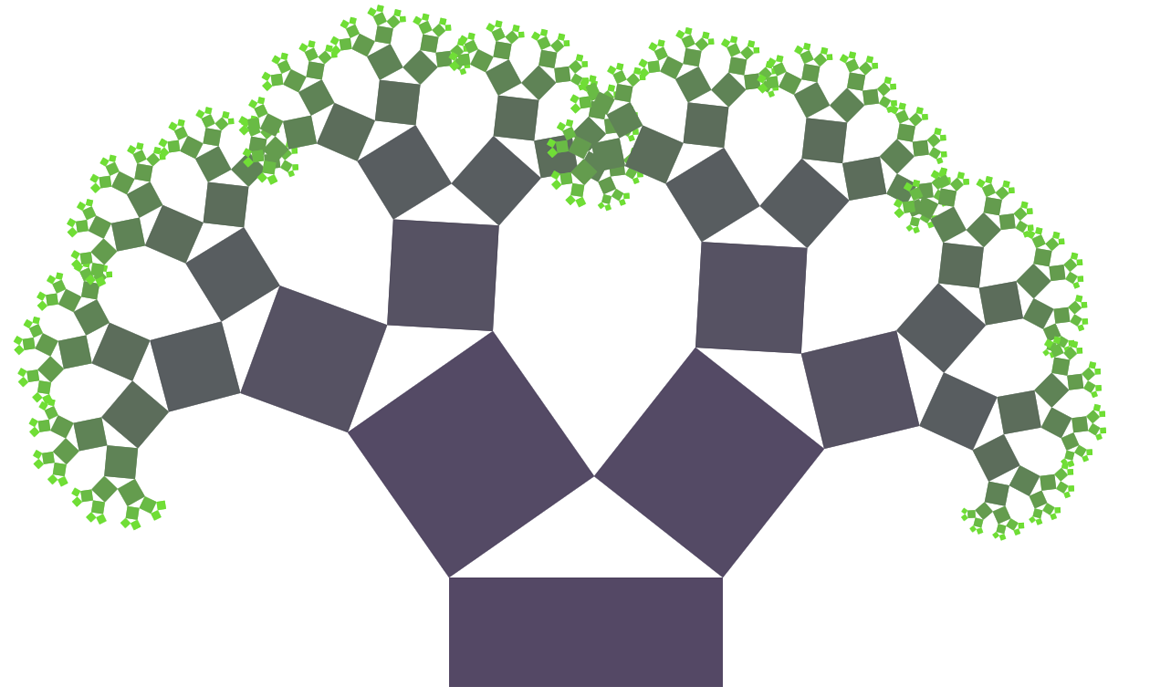 The thing about the swaying tree from the first example is that each square has two child squares; one on the left, and one on the right. This means that there is no way to give you a simple getBoxStyle(n) function – the nth box could have parents on the left and the right.

Now sure, we could do this by creating some funky recursive JavaScript. But as it turns out, React gives us a much simpler way to create elements based on their environment…

Continue to: Custom React Elements
React Armory is growing. Join in to be the first to experience new lessons, examples and resources.